Man, I’ve been slammed lately, so let me apologize for taking two weeks to write about my trip to the Indiana LinuxFest (ILF) in Indianapolis.

I was kind of surprised when Matthew Williams, one of the main organizers of the ILF, contacted me and asked me to keynote. While I’ve been both deeply involved and committed to free and open source software for over a decade, I don’t really view myself as a spokesperson for the FOSS community as a whole. I’m just part of a small team that is using open source as a way to make a living. And while I can talk about OpenNMS for hours, it was a different experience to chat about something “keynote worthy”.

The topic I chose was an examination of how the divisions within the FOSS community actual foster innovation and improvement. I titled it “Why We All Can’t Get Along (I Why This is a Good Thing)”. I think it was well received and it was fun to think about.

The conference as a whole was a lot of fun. I have to admit that I agree with Brian Aker that the most rewarding part of most conferences is what happens outside of the presentations, and to that end I got to spend a lot of time talking with Bradley Kuhn and Brian Proffitt. That night, we were joined by Carol Smith and Daniel Klein of Google. Most people know Carol as the Summer of Code maven. Daniel works out of the Pittsburgh office and has network management as one of his responsibilities (he has written the software he uses at the moment but I’m hoping to get him interested in OpenNMS). 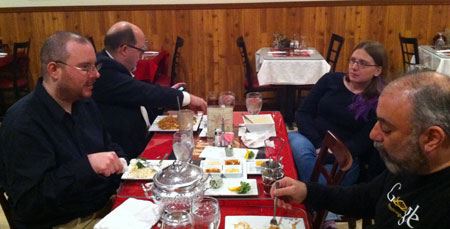 The only criticism I can level at the conference, and this applies to most new grassroots events I attend, is limit the number of tracks. I would say have one track for (at a minimum) every 100 people you expect to attend. This is confirmed people, not how many you’d like to attend or how many you hope will attend – be very honest with yourself and don’t worry about hurting the feelings of any speakers you have to exclude. Your attendees will appreciate a more streamlined conference and the speakers who are there will appreciate fuller rooms. The worst example was last year’s SELF conference that had about seven tracks, and it just got confusing.

Anyway, speaking of conferences, we have two OpenNMS User Conferences coming up this year.

The third annual OpenNMS Users Conference Europe. This will be held 26-27 May in Fulda, Germany, just outside of Frankfurt. The first day will consist of a class on OpenNMS covering the basics of installation, provisioning, event management, service assurance and data collection. The second day will be a barcamp-style day with presentations chosen by the attendees. We’ve had a large amount of interest so far and I hope it builds as we get closer to the date.

Mike Huot (OGP) suggested that we hold a conference in the US, so we’re doing something similar on 17-18 June in Minneapolis, Minnesota. This promises to be a lot of fun, since it is in advance of our annual Developer’s Conference, Dev-Jam so we should have OpenNMS contributors from all over the world for both events. If you are just starting out with OpenNMS or you have advanced questions, this will be the place to be.

Finally, let me make it clear that we welcome anyone to come to Dev-Jam for a week of OpenNMS geekery, and only the slightest bit of nudity. Held at the University of Minnesota, we take over a large “club room” in a dorm and hack on OpenNMS for the whole week. It is one of my favorite times of the year.

In other conference news, I’ll be speaking at this year’s Southeast LinuxFest, also in June, and I hope to be at OSCON this year, but they’ve been a little late announcing speakers so I’m not sure if I’ll be there or not.

Hope to see you all, in person, at some point soon.