I’ve spent the first half of this week teaching an OpenNMS course. It’s a lot of fun and we have a great class (the next one is in May if you are interested).

While I was talking to the students, one pointed out that he was able to get permission to attend the class because he was going to learn about “the number one systems management tool” available. While I didn’t disagree with him (grin) I did ask how he came by that information, and he pointed me to a Sys-con Media article published last month that compared 11 systems management offerings, both open and closed source.

I had missed this article, but it ends with:

OpenNMS 1.6.10 scores better than the competition, and is thus a better server monitoring software. Its basic features include a faster configuration process, web interface, compatibility and advanced features, such as “better automatic corrective actions”. OpenNMS is also free of cost. 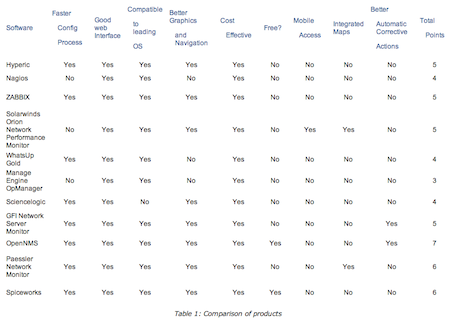 I, of course, think OpenNMS should have scored a 9 out of 9. The two areas that we missed were “Mobile Access” and “Integrated Maps”. Since the review was against 1.6.10 (versus 1.8.10 which is the latest stable version available) it didn’t have access to the iPhone app, and we have both greatly improved the built-in OpenNMS mapping feature as well as added an integration with Google Maps, Mapquest and Open Street Map for the remote pollers.

It was still nice to come out on top, however, and I hope this gets even more people interested in OpenNMS.