Yesterday I did a post about community. Quite seriously, without our community, OpenNMS would not exist. Unlike most applications, our target audience is rather small. We are aiming to replace bloated and expensive software suites like HP OpenView and IBM Tivoli, and that means we target large enterprises and carriers. Without our core community we would have little insight into what those target markets actually need.

I started my adult professional career at Northern Telecom. While communications technology has definitely converged (data is data, whether it is voice, data or video) the telecom and datacom cultures have not changed very much.

I can remember when a company I worked for installed a VoIP switch. Every day an e-mail was sent out announcing a time frame for the daily outage to reboot the system.

I can remember thinking, what? A voice outage? Unheard of.

In the highly regulated world of telecom, outages were unacceptable. I worked in E911 code, the emergency services number in the US. E911 outages were reportable to the FCC. Everything except the line card was redundant, and having to totally reboot a device was an extremely rare event.

Even now that telecom is much more aligned with datacom, traditional telecom companies have a different way of doing things. They are slower to change and much more conservative. This is not necessarily a bad thing, but it is different from the open source way of “release early, release often”. Yet this is an industry that can benefit greatly from open source, especially in the realm of open protocols and libraries.

Helping OpenNMS navigate that world is Dr. Craig Gallen. Since 2004, he has been our link to the influential TeleManagement Forum and he is now the founder of Entimoss, an OpenNMS partner in the UK. Craig has spent years proving that open source projects, such as OpenNMS, can play a role in what has traditionally been a closed and proprietary environment.

Just before Christmas, I received a letter from Aileen Smith, Senior Vice President in charge of Member Collaboration at the TMForum:

We would like to thank you for OpenNMS’ contribution to the TM Forum’s collaboration program, and in particular the participation of Craig Gallen.

In his role as co-leader of the TIP Shared Interface Infrastructure work, Craig has championed the cause of open source implementation libraries within the TM Forum and provided critical expertise and leadership.

Craig has acted as Architect of the JOSIF build & test system, and he has also architected the framework for the generation of skeleton Java RI and CTK code.

His commitment to the project is also evident as he undertakes the site maintainer role for the SII project and has given many training & webinar sessions to promote the product. In addition to his TIP activities Craig has been a contributor to and participant in the Cloud Service Broker Catalyst in Nice and Orlando.

Thank you for providing him the time to do this valuable work! Wishing you and your team a Happy Holiday and we look forward to working with Craig through 2011.

That letter has been sitting in my Inbox waiting for me to blog about it, but something happened that moved it to the top of the pile.

Outside of a number of yearly conferences held around the world, the TMForum hosts two “Team Action Weeks” each year. One is usually in Europe and one in the US. Last week, while Craig was in Paris for this event, he was awarded an Outstanding Contributor Award. 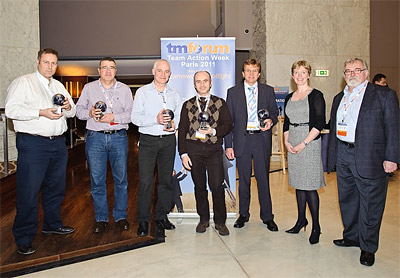 Craig is the first person on the left in this photo. (Photo credit TMForum)

… for outstanding performance and lasting contribution as
co-chair and champion of the Shared Interface Infrastructure tooling team for over 2 years. This team has released version 1.0 of the tooling, which automates and speeds up the development of interfaces. Craig has played an instrumental role in this program in relation to managing the Open Source site, configuration management, coding and more. He is currently focused on code development for the automated generation of the skeleton RI & CTK. This program will be key to the successful delivery of a number of new interfaces in 2011. Craig also participated in the Cloud Service Broker Catalyst at Management World Americas, which demonstrated how to simplify the delivery of complex cloud services to enterprise customers.

Awesome. His years of hard work are starting to pay off, and slowly but surely we are introducing open source into the world of telecom.

Congrats, Craig, and thanks again for your contribution.