Things are starting to blur together now, so I can’t really remember all I worked on Thursday. I know I played around more with RT, and in the early afternoon, Ethan came over and we did a podcast with John Willis and Michael Coté.

I’ll post a link when Coté puts it up, but I think it was one of my favorite podcasts of all time. Willis got to gloat when I said that I liked “the cloud” and I got to talk about some of the scalability features of OpenNMS, such as the ability to discover and manage devices with 32,000 interfaces each (virtual, of course) and a test we ran for the Department of Energy where OpenNMS was handling 125,000 syslog message a minute – more than the Netcool/Omnibus syslog probe could handle.

Oh, and OpenNMS did it for 8 straight hours before we stopped the test.

Ethan got to talk about Nagios XI and we had a friendly debate on the open source services model and the commercial software model. If you are in to that sort of thing, it will be worth a listen.

For dinner that night we ate leftovers, and then went to Big 10 for the weekly pub quiz. We started to play but got distracted by a game that Ben introduced to us called Mafia. 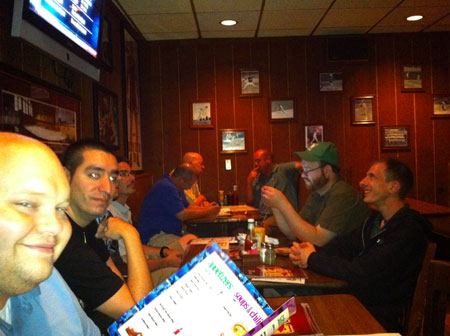 There is a moderator, who removes all of the aces and face cards from a standard deck, except for two aces, a king and a jack. They then add enough “plain” cards so that everyone playing gets one, and they are dealt out.

The people with the two aces are “mafia”. The person with the king is the “inspector” and the person with the jack is the “doctor”. All of the rest are villagers. The moderator then launches into a story about night falling on a village and every goes to sleep. Everyone playing shuts their eyes.

He then instructs the “mafia” to open their eyes, and then silently decide which person in the game they wish to kill. Once a decision is made, the moderator has them shut their eyes.

Finally, the “doctor” opens his eyes and the moderator asks them to indicate if there is a person at the table they want to save, and then they close their eyes.

The moderator starts their story again, stating that dawn has come to the village, and tragically someone has died. The game is then opened up for discussion and the villagers must decide on someone to lynch. That player “dies” and the game repeats until either all of the mafia are dead or all of the villagers are dead.

If the mafia targets the person the doctor chooses to save, no one dies in the night.

In our game the mafia targeted me in the second round, but the doctor saved me so I didn’t die (you don’t learn this during the game but I was told afterward). The villagers were victorious but it had nothing to do with me, since the final mafia member was Antonio and I kept arguing that it was stereotypical to blame the only Italian at the table.