For the second day of the conference, I had two tutorials lined up. Both, I’m happy to say, were really good.

The first one was on Puppet. While I’ve known about Puppet for some time, I had no experience with it, so I thought I’d be cool to check out. The tutorial was organized well and while I believe I’ve only scratched the surface of using the tool, the ability to easily add users via the command line on OS X is worth it alone (I kid, but I attempted to add a user to a Mac remotely this week and I ended up just changing my password and having a guy there log in and do it through the GUI). Since I just brought two new servers online, I’m thinking about deploying Puppet to keep them in sync. Of course, the idea of an integration between Puppet and OpenNMS obviously suggests itself, so I’ll be looking for ideas when I play with it.

The second tutorial was on Request Tracker (RT). The course was taught by Jesse Vincent, who started the project. We’ve used RT for years and we’re getting ready to do a new deployment, so I was hoping to pick up some new tricks. 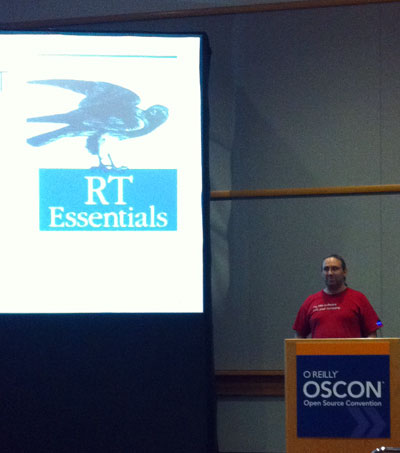 One that I’m excited about is that it looks like we’ll be able to put together a single sign-on solution between OpenNMS and RT. We already have a tight integration, but we have a client who is interested in making it even tighter, and that was a requirement.

What I enjoyed most about the talk was learning more about Best Practical and talking with Jesse. Best Practical is a true open source company like OpenNMS, and it was fun to swap stories and poke fun at the VC-backed fauxpen source crowd.

It was a full day, and I was happy to unwind with an old friend of mine who took me out to Miyamoto Sushi. The place seats 9, the food was extremely fresh and the portions huge. Being old, I called it an early night. I went back to the hotel to catch up on some work and to get ready for the first day of the main conference.