Last fall I bought an iPhone 3GS. It was a hard decision, but one I haven’t really regretted. Note that I don’t make many phone calls, so I was mainly interested in having a 3G iPod Touch, but I did have the requirement of having a GSM phone since I travel overseas a lot.

Last week, as you know unless you have been living under a rock, Apple introduced the iPhone 4. It was enough of a redesign that it triggered my “don’t by Rev 1 products from Apple” rule, so I was in no real hurry to get one. But then my wife, who is a runner, kept borrowing my iPhone for the MotionX GPS app to track her progress so I got permission to spend the extra money and get the iPhone 4 so she could have my old one.

After a week of playing with it, I have to say I’m pretty happy. The biggest weakness of the iPhone 3Gs (at least the way I use it) was the camera, and the new iPhone camera is much, much improved.

Of course a lot a press has been devoted to the “retina screen” and it is beautiful. I wear contacts that I take out every night, and one of the first things I do when I get up in the morning is pick up my phone to check e-mail. I have to bring it close to my face to see it, and it is almost impossible to make out the individual pixels. Think about it – the iPhone 4 is 640 pixels wide and the pictures I post on this blog I crop to 450 pixels.

I have also noticed much improved battery life. The iPhone 3Gs wasn’t bad and it would last me about a day of heavy use, but the iPhone 4 seems to go about twice as long. 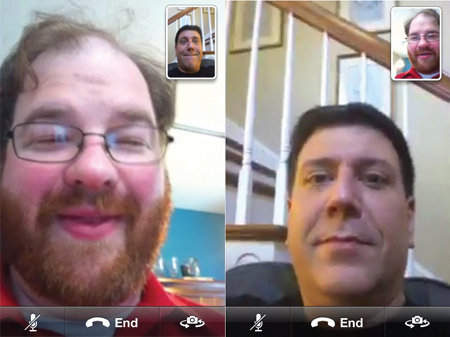 However, the only real “wow” feature has been FaceTime. I was chatting with OGP member Mike Huot and it worked amazingly well. In fact, I think the audio quality over FaceTime was equal to or not better than what I get over AT&T with a normal phone call (FaceTime is Wi-Fi only). Another cool feature is that you can switch between the front and the back cameras by tapping an icon in the lower right side which means you can show your caller what you are looking at without having to rotate the phone.

On the downside, much has been made about the attenuation of the signal when the device is being held. Unlike the other iPhones, the iPhone 4 is surrounded by a metal band that is also used by the antenna. I can tell you that the problem is quite real. While this may be hard to believe, I have never had a call drop from the office, and the first call I received on the new phone dropped within the first 10 seconds. Of course I was gripping in my left hand, which is apparently a no-no.

I think it is pretty easy to figure out how Apple missed this. In all of the real word tests the phones were in cases to hide the fact that they were new. This probably helped the signal and the fact that in Silicon Valley AT&T drops calls often, so the testers probably didn’t notice. In any case, I ordered my $30 rubber band which should help. I’ll know more when it arrives next week.

I’m not unhappy with my purchase as the camera improvements mean I can leave my point and shoot at home now, but barring the fact that my wife wanted my old phone I would not have bought at this time. Always, always wait for Rev 2 if you can help it.

Of course, programming on the iPhone can be painful. I usually spend 45 minutes just sorting out my certificates, although the new Xcode makes it a little easier. I only use it to play with the new OpenNMS iPhone app, but it is considerably harder than anything I’ve done on Linux.

I do have a little bit of guilt about buying such a closed product, but my reasons for buying my original iPhone still stand. However, I saw on MacRumors that there is a new project called “marble” which may actually become Xcode 4, and it got me to thinking. Since Apple now owns it’s own chip company, it could use Xcode to be the only way to compile on it (although Ben tells me that it would be much harder than that to lock it down). Then Apple could move all of their Macs to that chip and seriously lock down those as they have the iPhone/iPod/iPad. Thus OS XI or whatever would be as closed a platform as we’ve ever seen (well, at least on that scale).

A long shot I know, but scary.

So you might be asking “why in the world did you buy another iPhone, you freedom hatin’ conformist?” In part it is because I don’t view it as a development platform like I do a standard computer. I don’t need to have access to the code in my microwave or my car, for example. And I am seriously hoping that Android is able to catch up. I think it will, eventually, but that it will take time. Apple has a larger market cap than Microsoft, so they have a lot of money to throw at the product, and it is hard for a free, distributed community to compete with that as quickly.

But with enough time and interest, all commercial software becomes a commodity.