OpenNMS has survived and grown mainly through the support of its community. The core of that community is represented by an organization called “The Order of the Green Polo” (OGP) and it is the governing body of the OpenNMS project.

It is with great pleasure that I am able to announce today two new members of the OGP. They both hail from Germany, and they, along with Alex Finger (already a member) are responsible for the upcoming OpenNMS book.

I am constantly humbled by what our community is able to accomplish. We had been talking about an OpenNMS book for years, but it took three guys in Germany to actually make it a reality (well, at least real enough to pre-order).

Klaus Thielking-Riechert has been involved with OpenNMS since the spring of 2008 and is a regular contributor to the discussion lists. He and his wife are also fine hosts and have great taste in beer.

Ronny Trommer works for our partner in Germany, Nethinks, and while also involved in the book he has done a lot of work on the code as well. He gave us the idea for integrating with JasperReports. Here is a “morning” outage report he created (click for a larger image): 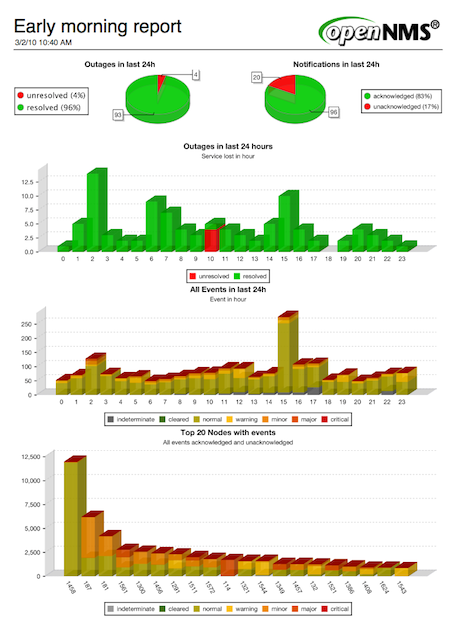 We have now formally integrated it into OpenNMS and it will be included in the next release, along with a large number of “canned” reports.

In an environment where the role of community in open source is being questioned, I am both excited and humbled to see ours doing so well. Come meet us at the OpenNMS Users Conference (early-bird registration ending soon).

2 thoughts on “New Order of the Green Polo Members”