The only way to get rid of temptation is to yield to it.

David was telling me about a program he watched on the Marriott hotel chain, where the founder was saying that he spent 100% of his time thinking about the business. That pretty much seems to jive with my experience, as rarely a moment goes by that I’m not thinking about OpenNMS.

I don’t think this is healthy, so I am trying to find some sort of hobby to occupy my mind that doesn’t involve computers. In the summer I raise vegetables but I wanted something for the winter as well.

I have a mental “bucket list” of things I want to do before I die, and I’ve accomplished several of them. I’ve jumped out of an airplane, gone trout fishing in New Zealand, had sushi in Tokyo, etc. but one thing stood out as a good choice for a hobby.

Learn to play the guitar.

In fact, I have always wanted to play a particular brand of guitar. Many years ago (I’m an old guy, remember) there was a short-lived television show called “Key West” with Fisher Stevens (who played the Indian character in the Short Circuit movies and the bad guy in Hackers). In “Key West” he ran a bar, and in one scene the camera pans across the bandstand and I saw the most amazing guitar. I described it to friend of mine who knows such things and they identified it as an Ovation Adamas. 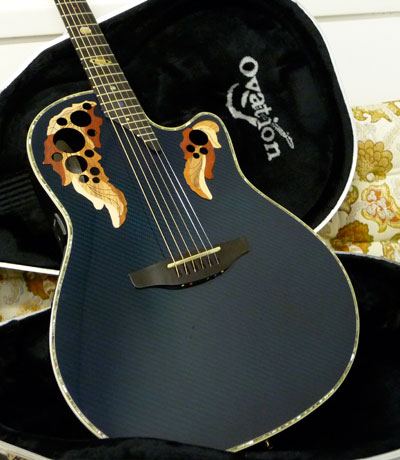 After many years of wanting one, through the power of eBay and a bad economy, I finally own one. It’s a 2000 Millenium CB edition, one of only 75 made, and while my wife doesn’t like it at all, I think it’s beautiful.

It also has the most unusual artwork on the fret board, featuring all nine planets (remember, in 2000 Pluto was still a planet).

I’m carving out an evening each week for lessons, so perhaps at the next users conference we can all get together and play a little music.