I’ve blogged in the past about my issues with Netflix, and I definitely have a love/hate relationship with them, but at the moment I am pretty happy as a Netflix customer. While I’m still not very satisfied with their customer service, they are making the right moves in other areas.

One is that streaming is now available on the PS3. I have heard that, in order not to break an agreement with Microsoft and the Xbox, there could not be a downloadable app, but they sent me a disk which allows me to stream from the PS3 to my television, which is only slightly annoying (I have to insert the disk versus just turning on the machine). 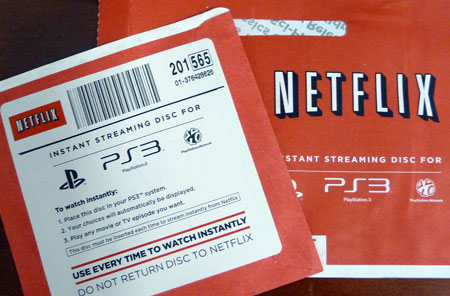 So I read with amusement that Warner Bros. Home Entertainment negotiated a 28 day delay before new releases would be available on the Netflix service, in exchange for more favorable terms and more content to be available via streaming.

I think this is a great deal for Netflix and a pretty stupid move on the part of Warner Bros. Their reasoning is that the availability of renting a DVD the day it is released cuts in to DVD sales. I’d love to see the numbers after this change, but my guess is that they will stay pretty flat.

My reasoning in simple. If someone loves a movie enough to buy it, that buying decision is made without regard to if it can be rented. Either they get it close to the day it is released since they like it so much, or they get it as a gift at some later point in time. In my own informal poll, people tend to buy movies they’ve already seen, and thus those that are sold in the first few weeks of release are sold to people who have already seen the movie in the theatre. This is unaffected by the availability of the title on Netflix.

But this is a great deal for Netflix, especially if they get better access to the Warner Bros. back catalog for streaming. I don’t think anyone will argue that in ten years (if not sooner) almost all video will be delivered via streaming, and so seeing Netflix positioning itself as the best streaming service is a smart move.

I think there are parallels here with open source. You have a legacy company like Warner Bros. trying to understand a new distribution model in much the same way you have commercial software companies trying to come to grips with open source. Netflix, on the other hand, is similar to OpenNMS as a company that “gets it” and is laying the groundwork to become a dominant player.

The biggest thing we struggle with is trying to break people out of the mold that good software must be purchased. People have the expectation that software comes in shrink-wrapped boxes with a DVD and a license key, and anything else is just wrong. In much the same way, Warner Bros. thinks that having early access to the physical media is important to a consumer’s buying decision.

Now the streaming service provided by Netflix does not compare with, say, the quality of a Blu-ray disk, but are you willing to bet against it getting close in the near future? In much the same way, OpenNMS is not a complete replacement for suites like OpenView or Tivoli today, but with large improvements year over year it will be. My guess is that companies that understand open source today will be the dominant players in the software markets of tomorrow.