While I have been in Dubai for several days now, only recently have I been able to get out and see some of the city. Fourth quarter for us is usually insane, this year more than others, and to be quite honest for the first two days I was here I did little more than work and sleep.

I didn’t arrive until nearly midnight, and there were at least a thousand people queued up at passport control. Once I got through that I wasn’t able to find the car I was to take to the hotel, which was compounded by the fact that my fancy new iPhone from AT&T was unable to roam internationally (the fix, according to AT&T, is to have it connect to an AT&T tower to “re-register” which is a bit difficult considering there are no such towers available when one is roaming internationally) and my credit card was declined (Citibank said that the initial swipe triggered fraud detection even though I had called them to let them know I was traveling).

I did manage to get everything sorted, but after that my allotted window for sleep was pretty small.

However, after work on Monday I took a cab to the Dubai Mall, the largest shopping mall by area in the world. Now, I have been to many of the world’s temples of consumerism, including Ginza in Tokyo and Orchard Road in Singapore (all with OpenNMS actually) and none can compare with the sheer scale of the Dubai Mall, or of Dubai in general. It is almost as if Disney World and Las Vegas had a love child that drank some mad scientist’s potion and grew to ten times normal size.

Not only is the Mall large, it is spacious, with huge installations including five story waterfalls and a world-class aquarium. I wandered around in awe for quite some time, and managed to get my obligatory McDonalds meal out of the way (I have ordered a Big Mac meal in almost every country I have ever visited). 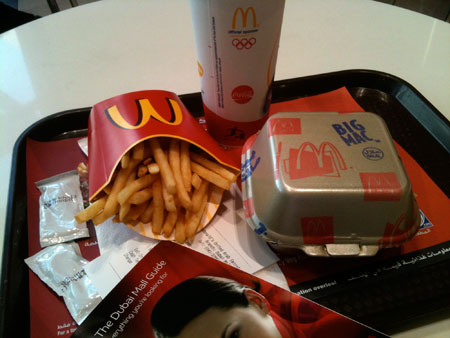 On the way back to the hotel, I was able to take some quick photos from the cab, including the world’s tallest man-made structure, Burj Dubai: 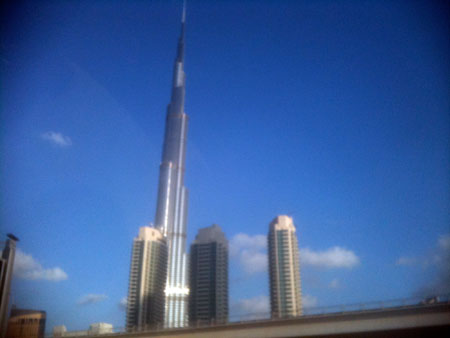 and a really poor shot of a metro station: 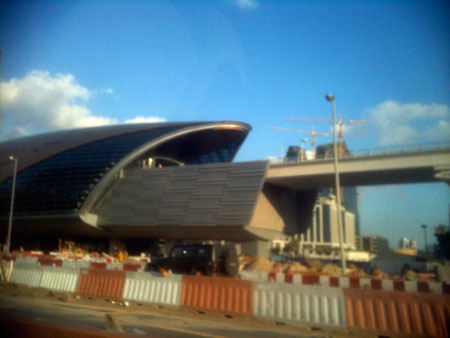 I rarely get an emotional response from modern architecture, but I am totally in love with the design of the Dubai metro stations. They drape over the tracks like some sort of giant golden scarab, and they really stand out. At points on the road you can see two or three of them at a time, and you get the idea that you are looking at the city of the future – something Disney wished for EPCOT or like something out of Total Recall.

Yesterday, my friend Yunus picked me up at the hotel and we actually took a metro train. 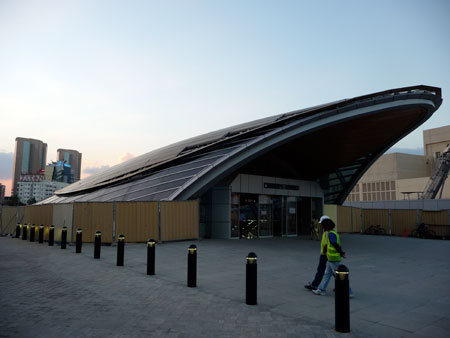 The Union station is actually underground, so it is not as impressive as the above ground stations, but it was still cool nonetheless. The metro system has only been in operation since September, and so everything is brand spanking new. The stations are immaculately clean, and it feels like they just took the shrink wrap off of everything.

We took the train to the Mall of the Emirates. Until the opening of the Dubai Mall, it was the largest mall in the world (by area). It is famous for having an indoor ski park called Ski Dubai, recently featured on The Amazing Race. 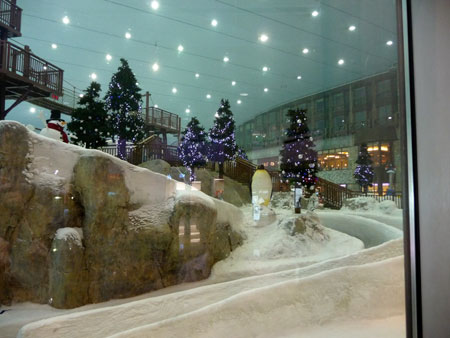 We had mainly gone there just to ride on the metro, so after a short visit we headed back. Yunus had told me that adoption of the metro system by the locals had been a bit slow, but you wouldn’t have know it by looking: 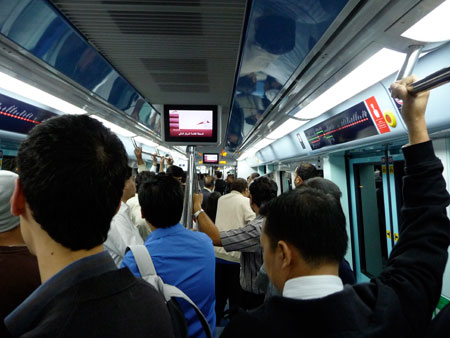 We then found a more traditional area which included an Iranian restaurant known for its shawarma. I was told that the thing to look for when choosing a shawarma restaurant is a queue outside, waiting.

He wasn’t wrong – the meal was excellent.

One thought on “First Impressions of Dubai”