That evening I presented a talk called “So, You Think You Want to Start an Open Source Business” at the Triangle Linux Users Group. TriLUG is the only LUG I know of that holds its meetings at Red Hat HQ, which I think is pretty cool. Unfortunately, it is rare that I can make a meeting, but I do try when I have the opportunity.

At each meeting they serve pizza, and since they know that Papa John’s is a big OpenNMS client, they bought from them (plus, they also knew that I was sponsoring it, so that might have had something to do with it, too). 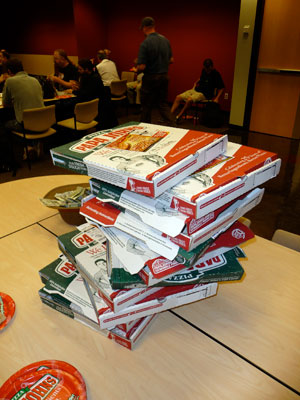 I think the talk went well, and I plan to present it again at this weekend’s Atlanta Linux Fest, although it clocked it at over 90 minutes so I’m going to have to work hard to get it into my allotted 45.

I really enjoyed being back at TriLUG. When OpenNMS was just me, my social life was centered on TriLUG and its IRC channel (sad, I know). In some way they helped keep me going, so I feel a certain amount of fondness for the organization.

Which is why I was surprised to learn that TriLUG has fallen on hard times financially. There used to be enough in the bank to not only cover pizza during months without a sponsor, but to cover the travel expenses of speakers from out of town (which enabled a slew of interesting people to speak at the meetings). When I found out about this I promptly signed us up as a “Gold” sponsor.

I also want to challenge any of the local companies around here who benefit from Linux and open source to help sponsor this organization. It is quite possible the next big open source application could be nurtured by this group.

2 thoughts on “Eight Years and TriLUG”