I’m writing this from the Admiral’s Club lounge at LaGuardia. It is on Concourse D, but my flight is leaving out of Concourse C. Unlike other airports, there is no way between the two concourses without leaving and returning through security, so I’ll be visiting the x-ray machine for the third time on my way out.

Despite that quirk, I’ve had a fun time in New York. I came up to teach a three day class on OpenNMS for Lime Wire. It has been a good trip and if the storms hold off long enough for me to get home on time, it will have been a great trip.

Lime Wire is in the process of moving into new offices in Tribeca. They are amazingly decorated, as if Pottery Barn and Crate and Barrel had a love child. There are some issues, however, such as a problem with the elevator buttons that resulted in a post on Failblog. 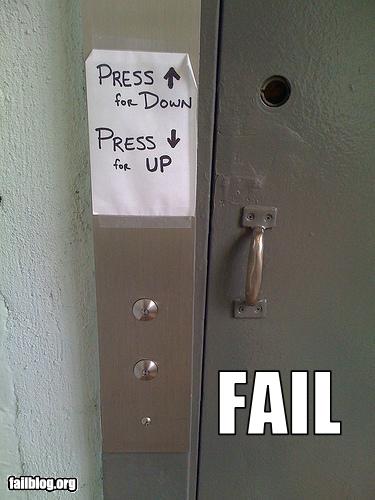 Friday night after class I met a friend of mine from high school, and he was kind enough to take me to a restaurant called Corton. After figuring out that Broadway was not the same street as West Broadway, I was able to meet up with him and dine on some very fancy dishes (the type where each little morsel comes on its own oversized plate that matches the shape of the food). We ate, drank and caught up on each other’s lives since we’d last met in DC, about 10 years ago. It’s the occasional night like this that makes the travel bearable.

Saturday night the Lime Wire guys took me out to the Odeon. It was a lot of fun, although Stuart (the manager) was they only one who got some of my cultural references, since we are both about the same age and somewhat older than the rest of the team. I visit a lot of companies and I’ve come to be able to recognize certain vibes, and from what I can tell Lime Wire is a great place to work. Plus, they’ve been using OpenNMS for a long while so they are obviously well above average in intelligence, and as you can see, extremely good looking.

Just before I came up someone pointed me to the Techcrunch article on the “Lime Wire Pizza” fiasco, so I was eager to get the whole story. Unfortunately, while some of the guys were at the party, no one was near enough to give me an first hand account. In the beginning of the story I was definitely sympathetic to the Dovecote guys, but when I got to “One of the Dovecote guys grabbed a whole pizza and tried to run away with it” that vanished. When one decides to escalate things to the point of theft, you’re kind of signaling that anything goes. But I guess when you think it is okay to publish stolen documents from Twitter, the theft of a pizza is nothing.

Even though I was asked to teach on the weekend, I had fun (well, as long as I make it home on time). Plus, it gave me a lot of ideas for decorating the OpenNMS offices when the time comes.

One thought on “New York”