This is another one of those customer service-centric posts with no OpenNMS content, so please feel free to skip.

I like to cook. It goes well with the fact that I have a physique designed for eating. Two of my favorite magazines on cooking are Cook’s Illustrated and Cook’s Country.

Both are great. They accept no advertising and tend to base a lot of what they print on experiments in the “test kitchen”. I like stuff that is backed up with lots of testing.

The downside? They have the worst subscription/marketing team on the planet. I dropped Cook’s Illustrated because they kept calling my house (at least twice a month) to try to sell me things despite repeated requests to be taken off their phone marketing list. But I couldn’t bring myself to cancel my Cook’s Country subscription since I like it so much.

Looks like I didn’t need to bother, as yesterday I received an e-mail telling me that my subscription had ended, even though I’d paid until 2010.: 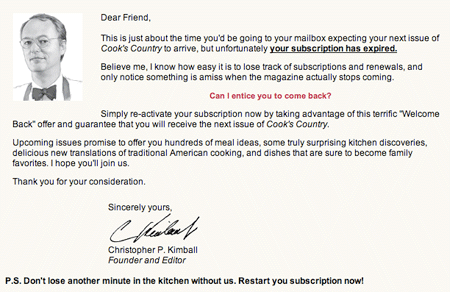 I called them and verified that, yes, I would continue to receive the magazines I’ve paid for, but what a way to put a black eye on an otherwise great magazine (outside of allowing their servers to be hacked, of course). The publisher claims to be some sort of “country” down to earth guy, but this kind of marketing is just wrong. Either they have a poor database, and are spamming people with incorrect e-mails, or this is some ploy to boost subscription revenues early.

In either case I don’t like it, and if it happens again I’ll drop even Cook’s Country.

NOTE: Wikipedia has a entry about the company’s aggressive sales practices.