(Other titles I thought about for this post included “Post Falls from the Edge”, “My Own Private Idaho” and the ever popular “I da ho”)

I am writing this from a hotel near the Spokane, Washington, airport where I am awaiting my usual club sandwich and trying to catch up on e-mail and such.

I spent this week in the middle of Washington state with a client. It was quite a departure from my normal trips which usually involve big cities, but I enjoyed it since I live in a small town and it made me feel more at home. Small town, desert Washington is much different from rainy, west coast Washington.

Even though I live in a small town, I still have some biases. When I was contacted by the client for some training and consulting services, I was curious what a small rural community would need with OpenNMS. I asked them how many devices they needed to monitor, expecting a couple of hundred, and was surprised when the answer came back 6800. We were replacing an OpenView install (as well as Netcool, but while they bought it they were never able to get it into production so “replace” is too strong a word).

Turns out there is a lot of fiber in that sagebrush, so not only do they have a lot of devices, their network is fast. The motel I was staying in had screaming bandwidth. I decided to try it out by running, uh, a peer-to-peer file sharing protocol used to distribute large files, and found I was able to download a 1.5GB file in about 10 minutes (peaking at 2 megabytes per second).

Speaking of awesome, I drove through a thunderstorm on the way back to Spokane. Storms on the prairie are something to behold. I’m driving along in bright sunshine, with the car’s outside thermometer reading 89F, and up ahead I spy a massive, solid-looking black wall streaked with bolts of lightening. After what seemed like an eternity, I finally reached it. The world went dark and raindrops the size of golf balls pelted the car.

Then the situation reversed itself. Off in the distance I could see it was lighter, and before I knew it I was back in the sun and the road was starting to dry. The temperature was 70F.

The rest of the trip was uneventful.

Oh, back to Idaho.

I have never been to Idaho, and since I had pre-paid for a tank of gas I decided to head over to Post Falls. 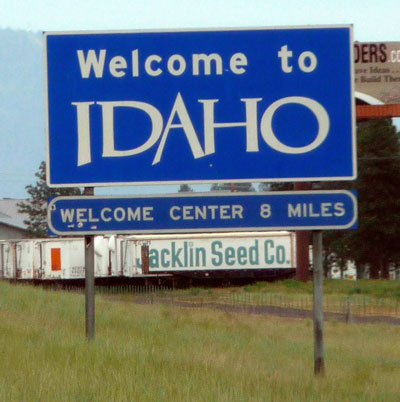 I was going to eat there but I realized I wasn’t hungry, so I stretched my legs, hopped back in the car, and headed to the airport.

So now I can say I’ve been in 45 of the 50 United States. Many of those have been to work on OpenNMS, including Iowa, Alaska, Hawaii, Vermont and New Hampshire. I’m still missing Rhode Island, Maine, Nebraska and the Dakotas, so if any of my three readers lives in those states, I hope to get to visit you soon.