I can’t help but think that John is also a geek. While I don’t think he runs around buying the latest technology for himself (more on that a bit later), he does embrace it. One of the first games I bought for my 386 PC back in the day was a Monty Python multimedia software package (before the term multimedia was mainstream) that included games, pictures, screen savers and it animated your desktop (it was called Monty Python’s Complete Waste of Time and was released in 1994).

So here is this guy, almost 70, and he’s still pushing the technology envelope. He’s on Twitter and has numerous web pages, including one called Headcast. Headcast is being revamped, although to get access to the new site you’ll need to sign up for John Cleese’s Nigerian Lottery, which he appears to only be marketing through Twitter.

On the new website you’ll find news, merchandise and be able to download 20-30 minute videos for US$2.50. You order through Paypal and then you get a link to download the video. The reason I didn’t post the URL to the new site is that I had problems with the download on my Mac via Safari. While the file seemed to download fine it was corrupted and wouldn’t play (one of John’s minions got me sorted via Vimeo). They should have everything working by the official launch.

What does this have to do with open source and OpenNMS? Open source is a disrupter in that the normal methods of software development and sales have been turned on their head. In much the same way, the entertainment industry is going through a similar change.

Movies are no longer the same since many people can afford large flat screen televisions and high end sound systems at home, so the desire to go out, brave sticky floors and sit shoulder to shoulder with loud, smelly people in a theatre is lessened. Even television shows are time shifted and people fast forward through the commercials. I don’t think the demand for good video entertainment is going away, but the revenue model is going to have to change.

Instead of complaining about it, you have people like Cleese who embrace change and come up with ways to profit from it.

For example: I follow John on Twitter. He tweeted about his Nigerian Lottery. I signed up. I got a link to the new Headcast site and downloaded World of Cheese. He got $2.50, and I bet his cut is much higher than he gets from a movie ticket. I got a somewhat exclusive John Cleese video. All of these technologies coming together to entertain me and compensate the content creator. Brilliant.

That long setup was simply there to preface my review of World of Cheese.

According to Wikipedia, Cleese was going through a divorce last year, and apparently this found him sequestered in a Covent Garden, London, hotel room. I’m assuming this video was shot during that time. The first 15 minutes consist of a rather intimate look around the room while John riffs on curtains, hotels in general and coffee. The last few minutes touch on irrationality, the holographic nature of the universe and jigsaw puzzles.

As someone who spends a lot of time in hotel rooms (over 60 nights last year) I could really understand his frustration. I can remember being in a hotel in Japan where I couldn’t figure out the air conditioning unit, even after I took a picture of it and asked my hosts to translate. 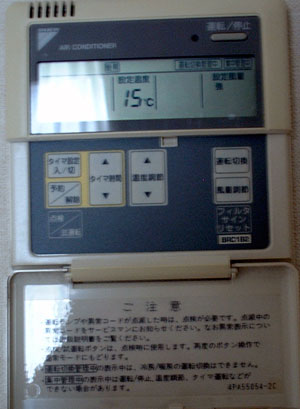 He didn’t discuss my favorite hotel topic: shower controls. You would be amazed by the differences in the knobs and buttons that control the water in hotel showers around the world. Besides your basic one knob/two knob choice, there are hundreds of combinations. Being the experienced traveler I am, I have it down to a science.

Recently I stepped into a shower and quickly sized up the situation: ah, the single knob, pull to start, rotate for temp model. Piece of cake. I pulled it out to find that housekeeping had left the little button in that turns “fill the tub” into “shower”. It usually pops out on its own, but for some reason this one didn’t. This meant that instead of the freezing cold water coming out of the spigot, it came out of the shower head to spray my unprotected, naked body (yeah, I know, thanks for that mental image).

While I visit hotel rooms, Cleese had to live in his, so there was a lot more stuff than I usually have. There was a large number of books, a stack of newspapers, and a rather amazing collection of wine (at least for a hotel room). He makes coffee using nothing but a large funnel and a coffee filter. His shower contained two large bottles versus the stupid 3oz ones I have to carry on the plane, and it’s kind of fun to look around as he talks to see what other things he brought with him. This isn’t the Minister of Funny Walks or Basil Fawlty, this is a moment from John Cleese’s life as he actually lived it, and I think it provides some insight into the man himself.

So if you are a fan of his type of humour and of John Cleese, go buy World of Cheese. If nothing else you’ll be contributing to the Cleese Alimony Fund (not tax deductible, unfortunately) as well as validating the business model.

NOTE: In researching this post, I came across johncleese.com. Awesome. Fans will remember Edmund Wells as the author of such classics as Grate Expectations in the Python Bookshop sketch.

UPDATE: the new http://headcast.co.uk/ site is up.

One thought on “World of Cheese”