In my commercial software days I used to go to the Interop show in Las Vegas, back when it was held at the main convention center. It was a huge show and pretty much the premiere event for networking gear. I think the last time I went was 2000.

I had the opportunity to return this year. The show has changed, it is now in the Mandalay Bay Convention Center and it is smaller than I remember. The NOC staff, however, is still pretty much the same.

As you can imagine, running a NOC at a show like this is no minor undertaking, but believe it or not the entire NOC is staffed by volunteers. Getting through an ordeal like an Interop show seems to bring people together, as many volunteers have been coming for years (I met one guy who had been coming here since 1996). The only downside was that this Interop marked the first since the passing of Jim “Haggis” Brown, a longtime NOC member. They had a place set out for him, along with a bottle of scotch. 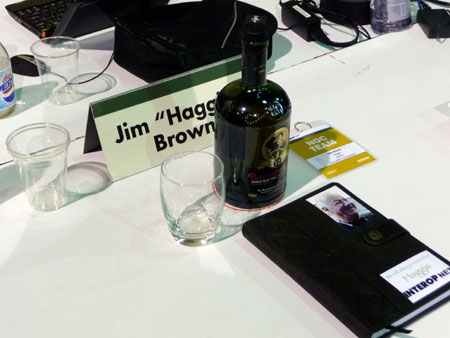 Speaking of bringing people together, this trip has been pretty serendipitous. For example, my plane from RDU to DFW had mechanical problems, so they routed me through Miami. As I was leaving the Admirals Club to walk to my gate, I ended up sharing an elevator with Chris McGugan. Chris is something of a superstar in networking circles. He was at Cisco for many years (based out of North Carolina), and now he is working at Avaya out in California. We used to share a townhouse about 20 years ago, and it had been about that long since I’d seen him. The odds of us running into each other the way we did were pretty long.

Even stranger, Chris used to work in the NOC at Interop, and he knew many of the people I had come to meet.

Another example of serendipity: on our first day at the show, Jeff and I were at a table utilizing some wireless bandwidth when John Willis walked by. He didn’t know we were going to be there, so it was nice to see he had decided to wear his OpenNMS shirt anyway. 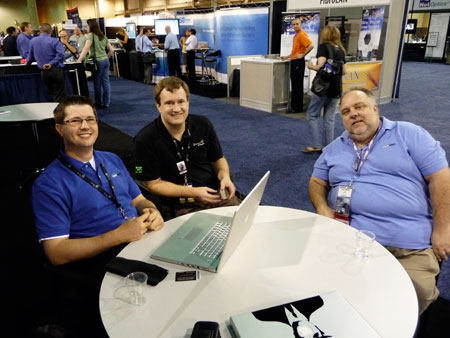 Things have changed a bit in Las Vegas since I was last here. There is no smoking near food (which pretty much leaves the casinos) and coins no longer work in the slot machines. Payouts are given on little slips of paper, and the machines will only accept bills or those little slips. I really miss the sound of the coins clanking around, and it makes the casinos seem quieter.

According to the cab driver, 40% of the usual conventions have cancelled this year, so the area is surviving on tourism. We stayed at the Luxor for $69 a night, and although it was a tower room, it was a deal. 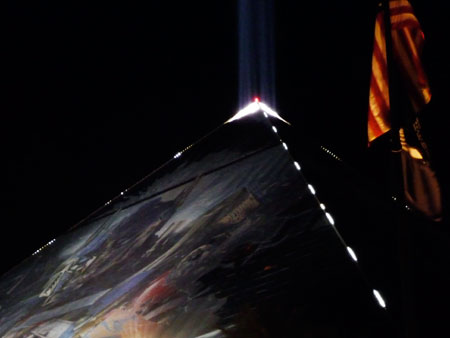 The Luxor is my favorite hotel on the strip. It is not the nicest or the most luxurious, but think about it – it had to have been built by a geek. If I was given a boatload of money and told to build something impressive in the desert, it would be a pyramid. Plus at night its blackness contrasts well with the brightness of the other hotels, even with the sides having been given over to advertising. 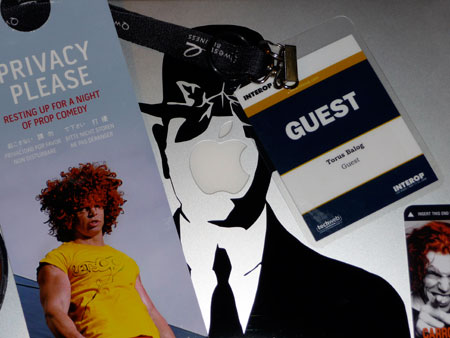 However, one of the Luxor’s main acts is Carrot Top, and the dude is just scary looking. His face is everywhere you go in the hotel, even on the keys and the “do not disturb” signs, and it gets creepy after awhile.

Back to Interop: the show had most of the people you would expect. We stopped by the HP booth to look at the latest OpenView. HP must be doing well, because they had some seriously thick padding under the booth carpet, which was awesome (if you have ever worked a show on a concrete floor for a couple of days, you know what I am talking about). I decided to talk a little smack to their folks in the booth. I thanked them for raising their prices so drastically since it helped us out, which caused them to asked about OpenNMS. When I told them it was an open source network management platform, the reply was “yes, but OpenView is for the enterprise.”.

I took that as my cue to bring up that we have customers monitoring over 55,000 devices with OpenNMS (them: “with a single instance?”, me: “yup”) and that we were replacing OpenView at a client in Italy because their devices, which have more than 32,000 interfaces each, break OpenView but work with us. Things got quiet and a little awkward after that, so we left (but the lady kept my card).

Microsoft was a no-show (or at least I didn’t see their booth), but I did get introduced to a company called Xirrus. Xirrus builds wireless arrays that have a high level of built in switching, and their marketing pitch was a face-off between their wireless “switches” and wired ones. They had a boxing ring in the middle of the booth and several times a day held actual bouts. When it wasn’t being used by humans, one corner held your traditional network switch (with lots cables of course), and the other corner held a Xirrus array.

The arrays looked like big roombas with RJ-45 connections, and they had really cool lights (Jeff took a video).

All in all it was a fun time, mainly because we got hang “backstage” with people who really seemed to both love networking as well as knowing a lot about it. What did surprise me were the number of people that were using OpenNMS. When we’d get introduced we were often met with “Oh, we use OpenNMS. It’s great.”

It’s nice to hear. While we have things like the Order of the Blue Polo and the Wall of Cards, we rarely hear from people who use the tool outside of our clients. And while we love our clients, usually when we hear from them it is to ask a question or report a problem. We work hard to make OpenNMS great while remaining 100% open source so it definitely motivates us to meet people who find it useful.

It was a little sad when the show ended and the equipment started coming down. Perhaps we can return next year.