Matt Asay has a way of pushing my buttons, and while I had pretty much decided to refrain from letting him rile me up, a post he made today saddened more than angered me. Since this was a new emotion with respect to Matt, I thought it was worth exploring.

He starts off with a question from a survey:

As written, of course the answer is “no”. It’s a loaded question. If one guy sits down and writes an application, and then publishes it under an open source license, why would he need anyone else? What would it mean for him to “survive”? Feed himself? Feed his family? Have a multi-million dollar exit?

A better question is “Can open source benefit from a vibrant and active community?” Of course the answer to that is “yes”.

He then goes on to state:

… “community” is perhaps the most overhyped word in software, one that doesn’t deliver nearly as much value as marketing people would like you to think.

… we tend to think of community as a group of people that actively contribute code to a project.

I don’t know who “we” are, but that is a very, very narrow definition of community. I consider anyone who uses OpenNMS and finds some value in it to be part of our community, not just the people who contribute code.

Then we get to the “moron” section of the post. Matt quotes Linus Torvalds:

… anybody who argues against free-loading in open source is a moron.

Argues against? Heck, I embrace free-loaders. They’re great. I want as many people as possible to download and use OpenNMS – for free. Why should someone have to have a background in computer science to get value out of open source software? Of course projects like the Linux kernel, which is used by millions, have relatively few people contributing back. Heck, I’ve been using it for over a decade and I wouldn’t know how to recognize a kernel bug or how to report it, much less fix it.

Likewise, OpenNMS is a complex piece of software and it takes some intense dedication to get to the point where one can contribute code. I don’t expect anyone to sit down and suddenly dedicate hours and hours of their life working on it. Plus, I would never expect someone to contribute anything to OpenNMS unless they started out with some serious “free-loader” time.

There is more to the post where it seems Matt is arguing that only corporate, commercial software companies can create successful software products, but I’m living proof that this isn’t the case.

Seven years ago this month, I started my own company focused on OpenNMS. It was me, a laptop, some space in the attic and a book on Java. It was the community around OpenNMS, especially the members of the Order of the Green Polo, that kept OpenNMS (and me) going, and it was also the many users, such as those in the Order of the Blue Polo, who urged us to keep going.

And it has been an amazing ride. Speaking of community, this week Alejandro Galue has come up from Venezuela to work on OpenNMS: just because he wants to, not because I am paying him. 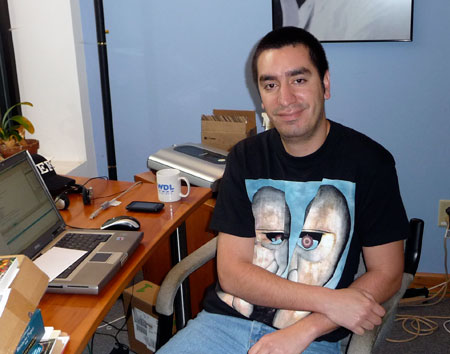 Considering the tensions between the governments of our two countries, it’s amazing how there is absolutely no tension between us. People working together on a common goal like open source seem to transcend national boundaries.

At OpenNMS, we are replacing products from HP and IBM at some of the largest companies in the world. We have another client who is going to imbed OpenNMS in their management offering. We’ve been profitable since Day One and we continue to grow year after year. This was due to a lot of hard work on our part, but we wouldn’t be here if it weren’t for our community. It’s not hype – it’s just a fact.

Wikipedia defines “Sour Grapes” as “to deny desire for something one cannot attain.” I am saddened that Matt apparently has never truly experienced being part of an open source community, or else he wouldn’t be able to dismiss it so quickly. I am pretty certain that this is because Alfresco has built a business model more aligned with commercial software than open source, and they haven’t spent the time necessary to build that community, or perhaps they don’t have the skills or the temperament. Commercial software licensing and business goals are at odds with open source software and associated business models, and that will be hard if not impossible to change.

Just because you’re doing something wrong doesn’t mean it doesn’t work. When communities do work, it is mighty sweet.