We got about four inches (10cm) of snow last night. 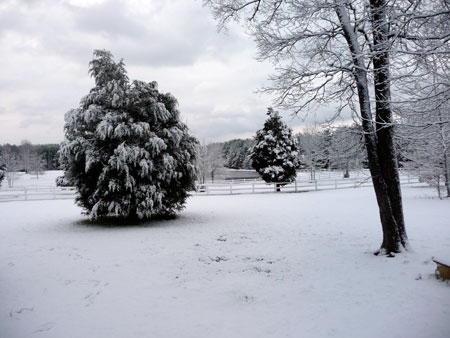 What sucks is that since I have broadband at the house, it is still a work day.

I remember watching the Brady Bunch when I was a kid, and Mr. Brady would come home from work complaining about a rush job project he had to work on that was due in six weeks. These days six weeks seems like an eternity.

Side note: This was the first show where I discovered a continuity problem. There was an episode where Greg, the oldest boy, wanted his own room. The parents were in bed talking about it when one of them suggested the attic, to which the other replied that it would only work if Greg were 3 feet tall.

However, later in the series, Greg and Marsha (the oldest girl) argue over who gets to move into the attic, which is shown to be rather large (well, for an attic).

I count bullets, too. I knew the “punk” in Dirty Harry wasn’t going to be lucky.

One thought on “Sometimes the Internet Sucks”