Nice post by Matt Linderman over at 37signals about starting a business.

When I started working on OpenNMS on my own back in 2002, I think the company grossed about US$60,000 that year. Last year we did seven figures. All of this was without investment, without a board of directors and without a formal business plan.

Our business plan is always changing. At one point in time I expected consulting services to make up the bulk of our business. As we’ve grown it’s become much more about support and custom development.

Matt makes a good point in asking yourself about “who spreads these scare tactics about things you need and hoops you have to jump through”. I take it a bit further and suggest that you take a cynical or at least critical view of everything you read concerning business (especially the crap I write).

I often wonder why OpenNMS is never included in industry articles about “open source network management” even though we are often the number one hit when searching for that term on Google. 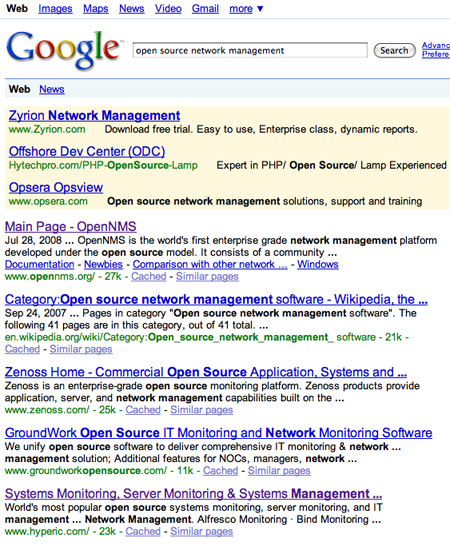 My only assumption is that the people who write those articles do so to drive ad revenue, and since OpenNMS doesn’t spend any money on marketing, there is no reason to include us. We don’t issue press releases (or the ones we do get ignored) so I guess that is the beginning and the end of the average industry hack’s research.

I get just as cynical when someone claims to be the enterprise cloud company or an open source company that sells proprietary software. I try to imagine the motivation behind it – in one case to be associated with the latest buzzword and in the other case to market their commercial software.

In any case, I digress as usual. The barriers to starting a business have become so low that anyone with a mobile phone, a laptop, a color printer, an Internet connection and access to a decent office supply company can start a business. There is no excuse for not quickly moving from the idea stage to the production stage. While I won’t claim that things like business plans and advisors have no value, they are no longer as important as they once were. A small company with focus can do just as much without them.