We use Macs in the office. When someone new joins the group they get a state of the art Macbook with an Apple Care contract, and they are told that they have to live with it for three years.

We’ve been pretty happy with them. My only complaint is that while there is an Apple Store nearby they really don’t have “business-level” turn-around times (I can’t be without my laptop for a week while it gets fixed).

I still have a year and a half left on my laptop and I’m considering going Ubuntu or Fedora on my next purchase, but there are certain little features in Mac OS X that I’ll miss.

One of those concerns battery power. When my battery gets low I get a dialog box that warns me of this. When I connect it to external power the dialog box goes away, without my having to click on any buttons.

I don’t know why that impresses me so much (and if it has been duplicated in a Linux distro I’d love to hear about it).

Anyway, lately I have been missing this little amusement because, without warning, my Mac just shuts off. No warning, no sleep or hibernate, just off.

Now I try not to bother support people without at least searching for a solution, so I ran some queries and tried out many of the suggestions, such as resetting the PRAM, which sounded reasonable, to repairing disk permissions, which didn’t but I didn’t think it would hurt anything.

I called Apple and was quickly connected with a support technician. Is it me or do all of the Apple support technicians sound alike? I always think I’m talking to some young, twenty-something, skinny white guy.

Now here is what I love about this support experience compared to others I suffer through. The guy did not treat me like an idiot. Once I told him that I’d reset the PRAM he didn’t insist that I do it again. Instead he just asked me for some battery statistics from the System Profiler, specifically the “Full charge capacity” and the “Cycle count”. 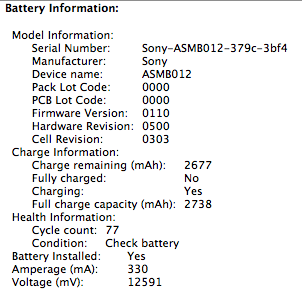 Once I told him the values he quickly determined that my battery was going bad and that they needed to send me another one. So a new battery is on its way and all I have to do is send the old one back (Note: I checked David’s Macbook and both of those numbers are doubled on his machine).

It’s service like this that will make it hard for me to switch. There are three main things that I took away from this exchange:

Bad batteries are probably pretty common, so I don’t think this qualifies as “heroic effort,” but it was still a nice change from “do you realize your password is case sensitive” and “have you tried powering the unit off and back on” and other script drones with which I usually have to deal.