It’s snowing here today. For many who live in cold climates you are probably saying “big deal” but it is rare to have snow where I live and this is the most significant snowfall we’ve had in four years. By the end of the day we could have up to six inches (15 cm). 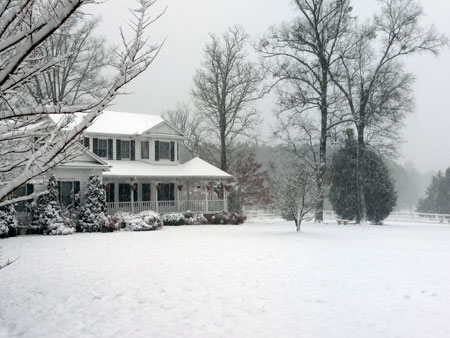 Sortova Farm in the snow

Since it happens so rarely we don’t have the equipment to clear the roads quickly so everything pretty much shuts down. At the OpenNMS Group we’re used to working from home several days a week so it will be business as usual, but I did cancel two meetings today and it frees me up to watch the coronation at noon.

It also allowed me some time to browse through my news feeds, and I came across an interesting post by the 451 Group.

I like the 451 Group, mainly because they realize that OpenNMS exists (grin). In addition, they seem to have a good understanding of the open source marketplace.

Today Matthew Aslett wrote that Intalio has raised funds to acquire 8 to 10 open source companies in the next year. It was interesting to me for a number of reasons. Most open source business models that I’m aware of have being acquired as the exit strategy, but many of them take the VC route to get there. Most VCs are looking at a big payout, say north of US$100 million, but the number of companies that can spend US$100 million on an acquisition is small. However, the number of companies that can spend, say, US$10 million, is much larger, so it would seem that the safer way to get acquired would be to either bootstrap the company (like we did) or get a small amount of angel funding to get started and to keep the company small and focused. Plus the model of acquiring smaller companies worked well for JBoss.

Small (25 employees is a maximum, less than 10 is preferred, mainly engineers)

The OpenNMS Group has six employees, and half of those were added in the last 18 months. We are all technical – there are no full time sales or marketing people.

Open Source or ready to go the COSMO way

Duh. We’re free and open to a fault.

Exceptional technology that took many person-years to develop

OpenNMS has been around since 1999. A tremendous amount of work has gone in to building it, both from the commercial side as well as the community side.

Architecture compatible with the one built for Intalio|BPP

From what I can tell, OpenNMS would be a good fit. We’re written in Java utilizing a lot of the new enterprise technologies such as Spring and Hibernate.

Got that. The newest OpenNMS code adds REST-style interfaces, we support most industry standards (SNMP/WMI/TL1/HTTP), and there is always lots of XML.

Active user base (the larger, the better)

With 50,000 unique visitors to http://www.opennms.org and 5000 downloads each month I think we can check that off.

Committed customer base (the larger, the better, but small is OK too)

I’ve never worked with a better group of people. I think “committed” is too weak a word to describe their dedication to both the company and the project. While most of us are near RTP in North Carolina, Jeff is in Atlanta, so the fact that location is not important is a plus.

Yup, got that. Since our business model is “spend less than you earn” we’ve been profitable since our first day in business.

Little or no debt

Heh, since we’re bootstrapped the opportunities for debt have been pretty limited (banks are a little wary of loaning money to companies with no liquid assets). So while that has caused us to grow more slowly than I would like, the company remains closely held and well positioned to ride out the current economy.

So it looks like we’re a pretty good fit, which gives me a little more confidence that what we are doing is the right thing (remember, I’m making most of this up as I go along so any reassurance is nice).

Since snow gives me time to reflect a bit, I’ve been thinking about what kind of company I’d be willing to allow to acquire us. They’d have to be doing cool things and provide a great work environment. They’d also have to have a serious interest in investing in the OpenNMS project itself, versus just buying it for the name or to get us out of the way. Their business would have to fit in with our mission statement of “Help Customers – Have Fun – Make Money”.

In exchange they would get the best bunch of guys on the planet. Seriously, each day these guys amaze me. They’d get a solid customer base and a mature, profitable product line.

One problem would be that they’d also get me. I’ve often wondered about my role should we ever be acquired. When I search Monster for “loud-mouthed, opinionated, free and open source bigot” I get no hits [Update: heh, actually I get eight]. My job at OpenNMS has always been to hire people smarter than me, which I’ve succeeded at beyond my wildest dreams, so next to them I start to lose my relevance.

I think the role I’d be best suited for would be Community Evangelist, or Vice President of Openness. I hate the term “community manager” because it seems to refer to the open source community as a resource to be manipulated, versus something to be nurtured and grown. Would Community Gardener work? God knows I’ve got the fertilizer (grin). I’d love to see if I could get as excited, and thus get others excited, in projects that compliment OpenNMS as I do with OpenNMS itself.

Fun thoughts for a cold day.

3 thoughts on “How Much is that Project in the Window?”