One of the things I like about living where I do is the high density of amazing people. Part of that is due to the proximity of universities like UNC, Duke and NCSU. Silicon Valley likes to brag about its atmosphere, but I think parts of the Triangle could give them a run for their money.

Yesterday, living here allowed me to have lunch with Dan Ariely. Dan is the author of “Predictably Irrational” which is a book of which I’ve become quite fond (if you haven’t bought it already, order it using this link since I’ll get some Amazon kickback, yo). He is the James B. Duke Professor of Behavioral Economics at Duke, and since that was one of the schools I got kicked out of it was nice to visit the old neighborhood. 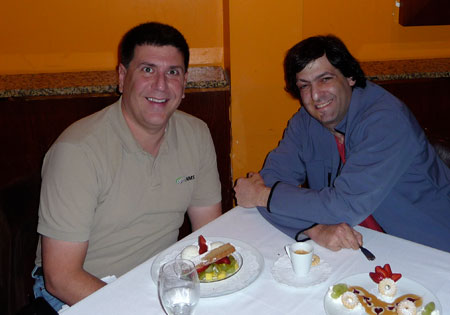 Me and Dan at Parizade

I studied economics in college, and while I liked the logic behind it, it assumes that people react rationally. Dan was the first person I came across that actually studied how people reliably act irrationally when faced with certain decisions.

Lunch lasted close to two hours, and I’d probably still be there now if he didn’t have a meeting (yeah, most of you who know how much I like to talk are thinking it wasn’t a real meeting, admit it) and the topics were pretty wide ranging.

One topic that stuck in my head concerned lotteries. People like lotteries and gambling in general, but I never understood that the games play to an innate attraction of animals to randomness. I’ve just always joked that lotteries are a tax on people who are bad at math.

B.F. Skinner did some work on the power of random rewards. When a pigeon was taught to press a lever to receive a food pellet they were much more likely to press it if the reward happened after some random interval than, say, consistently after five presses. In fact, even after the reward stopped the random reward subjects would end up pressing the lever for a long time afterward.

Think about it. Suppose I set up a game where you bought $1 tickets and after you bought five of them I gave you $5. You’d probably think, like most people would, that it was a stupid game and I wouldn’t sell any tickets. Yet the expected return on lotteries is so much worse, yet people play it every day.

Dan told me that the average American adult spends $4000/year on gambling (including the lottery). I haven’t been able to find a reference for that number but if it is true then there are a number of people out there spending large amounts, since my family probably spends less than $50 a year and that definitely brings the average down. I buy the occasional Powerball ticket for entertainment purposes (the daydreams I have about what I’d do with the money are worth the dollar I spend) but since the odds of winning the jackpot are 1 in 195 million I only play when the jackpot is greater than $195 million. I’m no dummy.

So here I was, eating a nice lunch and feeling superior, when Dan pointed out that the same thing can be applied to e-mail.

As I write this it is all I can do to stifle the urge to switch over to my mail application. It just beeped at me. I have new mail. Could be a letter from and old friend. Could be spam. Might be a support ticket or possibly new OpenNMS business. Like Skinner’s pigeons (or Pavlov’s dogs) when the bell goes off I must go and investigate.

So I’m not all that superior to those people who play the lottery or spend their lives in Azeroth. I have an e-mail problem, and now I have to think about how it impacts my life and how to address it.

This was just one of the things Dan and I talked about. It was a great, e-mail free lunch.

Plus, he got me thinking out of the box.