One of the things I like about my job is that I get to travel around the world. While I love living in the United States, it is great to get the perspective of people outside the country. They often have a lot to offer.

I also like food. Whether its Indian in London, tacos at a small stand in Mexico, or sitting in a cafe in Naples having lunch, it’s all good.

Awhile ago when I was in France my friend Alex introduced me to the liqueur called pastis. While I tend not to like licorice flavors in general, I really enjoyed pastis and it was a perfect start to dinner.

I was reminded of pastis a few weeks ago when I was on holiday in New Zealand. We were eating at this French restaurant in Wellington and they had a nice selection of pastis (pastises? pastisi?). I had the Henri Bardouin and liked it so much I wanted to be sure to get some when I got back home.

But that was a problem. In North Carolina, where I live, “spirits” (pretty much any alcoholic beverage other than beer or wine) can only be purchased at state-controlled stores. It is rare that you can get anything unusual or obscure in these places, and I doubt there is a bottle of pastis in the entire area.

However, I am in Chicago this week and they have a place called Binny’s that carries a huge selection of beverages. I was invited over to the client’s house for dinner, and I figured that a bottle of pastis would make a great gift to bring. 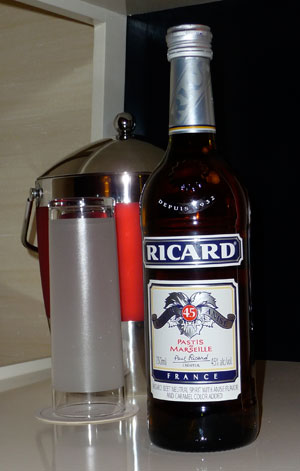 Unfortunately they didn’t have the Bardouin, but they did carry one by Ricard that looked promising. The only thing odd was the addition of “caramel color” which turns it from being clear to more of a whisky color (I’m not sure why they did that).

To add a little twist to my purchase, while I was buying the bottle a TV crew from the local CBS affiliate asked me a couple of questions. My five seconds of fame begins about 50 seconds into the clip. Ben says I looked like a “gay eskimo” but hey, it’s cold here.

The Ricard, despite its color, was very nice. Pastis is similar to absinthe, and so when you add water to it the somewhat clear liquid turns milky. The suggested ratio is 5 parts cold water to one part pastis, but I tend to like it a little stronger, more like three to one.

Speaking of absinthe, I saw a number of bottles at Binny’s. I had thought that absinthe was illegal in the US, but it appears that with certain restrictions some brands are allowed. I am eager to try it, but I figure I’ll wait until I’m back in Europe and I’ll try to obtain some Verte Suisse or Jade Edouard, which are supposed to be a pretty authentic.

I’m all about the authentic.