Things are really rolling now. We’re heading toward the 10,000th subversion commit since we migrated from CVS last year. That’s a lot of code changes.

For dinner, our perennial Dev-Jam sponsor Papa Johns Pizza stepped up with some free pie. I’ve written about Papa Johns before – they have sold more than US$1 billion in pizza over the internet and for most of that time have used OpenNMS to manage their network. 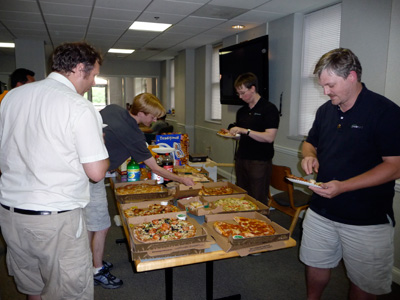 Plus, I think they make great pizza. Before you flame me, I’m not trying to compare their product with the handmade, oven fired pizza I had in Naples or your favorite pie from the neighborhood pizzeria, but for a large company their product is pretty darn tasty and consistent. They sent one of their Spinach Alfredo Chicken Tomato pizzas today and it is very nice.

Hats of to Chris in Louisville for getting it approved and Ray in Atlanta for arranging everything.

While I’m thanking sponsors, let me send a shout out to Chris and Leslie over at Google (second year in a row they’ve been a sponsor) and to Adam at NetRegistry in Australia who also helped make Dev-Jam happen this year.