Today Bill Gates officially retires from Microsoft. As much as we might like to hate his policies, without him I doubt our industry would be what it is today. He took the power out of the hands of IBM and put it into the hands of everyday consumers. He amassed a great fortune, and it looks like he’ll be using the rest of his life to spend it, mainly on charitable causes. By doing so he has created an example for others, like Warren Buffett. I wish him well.

The first piece of computer software I ever bought was published by Microsoft. It was the “Colossal Cave Adventure” for the TRS-80. 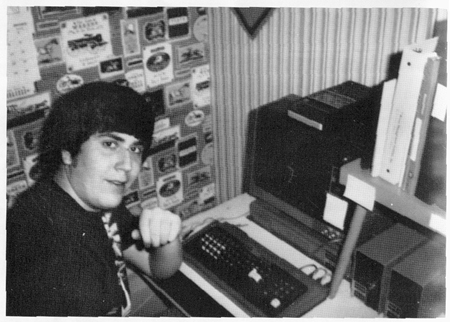 A picture of me yoinked from my high school yearbook

The TRS-80 was my first computer. I got it for Christmas 1978 when I was 12 years old. It had 4K of RAM and a black and white screen. By April of 1979 I had upgraded it to 48K of RAM (the other 16K of addressable memory was in ROM) and added two 80K floppy drives. That system ran “TRS-DOS” which shared a lot of similarities for what would become MS-DOS.

Now, back then most software was “open” in some sense. Most programs for the TRS-80 were written in BASIC, which is an interpreted language so it was not possible to hide the code. We didn’t have the Internet back then, so my main contact with others was through magazines, such as Creative Computing and Kilobaud. They would often publish program listings that I would stay up late typing in and modifying. Of course I’d make mistakes, but that would help me learn to troubleshoot code.

My Dad was working for General Electric at the time, and I sometimes got to play on their PDP 8. It ran FORTRAN, but it was similar enough to BASIC that it was easy to pick up. In 1982 he bought one of the first IBM PCs: CGA monitor, dual floppies, 256K soldered to the motherboard.

Also in 1982 I went off to high school. They had a VAX, and so I was introduced to the concept of multiuser systems. We had e-mail and shared space were we could put up documents – sort of a precursor to the web.

In 1984 I went off to California to attend Harvey Mudd College, one of the many colleges I eventually was asked to leave (I’ve been kicked out of some of the finest schools in the country). There I met my first VAX running UNIX (Berkeley I believe) and experienced the Internet for the first time (as well as wasting hours playing rogue).

When I eventually returned to North Carolina in 1986 I didn’t have a computer, but a friend had bought one of those fancy “Macintosh” computers. It was pretty cool, but I couldn’t afford one so I used a PC. Several friends of mine from Mudd had gone off to work for this company called Microsoft outside of Seattle. They would send me software, including a Paint program launched on a system called Windows (version 1.0). It really didn’t compare to, say, MacPaint on the Mac, but little did I know how it would catch on. I also got Windows version 2 and eventually 3.0. I could run an app called Procomm that would let me use a modem to communicate with other systems.

Using a modem you could dial in to bulletin board systems (BBSes) and post messages, send mail and download files. I tended toward those systems running WWIV, and in just day or two I could get a message to a friend of mine across the country through Fidonet and other grassroots networks.

Some BBSes were multiuser, but that required multiple, expensive phone lines. So flame wars were funny: you’d have to post, log off, wait awhile until the other guy could log in and post, then repeat the process.

I can remember when 2400 baud modems came out because it was the first time the text would download faster than I could read it. True Internet access was only available on campus, but I eventually found a way to dial in to the campus network (I had friend in IT) so I could use it from my apartment.

Ah, those were the days. Anyway, what are your first memories of Microsoft and what was your first computer?