Okay, due to the strike in Bergen, after spending about 24 hours there I had to take an eight hour train ride back across the country to Oslo. I arrived at just before midnight (it was still pretty light outside), got about four hours of sleep and then headed back onto the plane.

I had to change planes in Copenhagen, but since I didn’t leave the airport I can’t say I’ve “been” to Denmark, but I did buy breakfast there which resulted in change in Danish kroners (vs. Norwegian kroners vs. Euros vs. British pounds) which brings me across four currencies since leaving the US.

I arrived in Geneva right on time and met up with David (who came from Holland) and we were met by another Alex, Alex Finger.

Alex was born in Germany, works in Switzerland and lives in France, so he is one of the more culturally aware people I’ve ever met. I always tend to learn things around him (as he is also amazingly smart as well).

He took us into France and asked if we wanted food. He suggested a “festival”, and I wasn’t quite sure what that was. I mean, I understand the normal use of the term, but Newton Circus in Singapore is a food court (there are no elephants even) so I didn’t know.

Well, it turns out that it was a festival in the traditional sense, le petit pays performed by Grandes Médiévales d’Andilly. It was a full fledged Mediaeval festival that would have done Mike Huot proud. It had musicians, costumes, food and sword fighting.

Of course, the French came out on top (well, except for the Battle of Agincourt and struggles in that period).

We ate roasted pig (it was okay, but being from North Carolina I take roasted pork seriously) but the scenery was just amazing.

Even though I’m more exhausted than I can remember, I love my job. As a country boy from North Carolina it was amazing to find myself sitting against to a replica of a catapult on the edge of the French Alps on a beautiful day – all due to a little thing called OpenNMS. 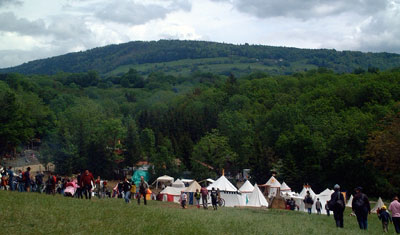