I’ve live in rural North Carolina (USA). While it is still technically winter, we’ve recently had a bit of warm weather, and spring feels just around the corner. Yesterday I saw a grey fox, and I fall to sleep at night listening to the frogs.

So it may seem strange that as a “country boy” I recently had an amazing trip to Tokyo.

I guess this is a good time to mention that I have always wanted OpenNMS to be an international application. I have been lucky enough in my life to spend time in different countries, and I’ve always wanted to work on a project that can bring together people from different parts of the world, with different ideas and cultures, to create something special. To this end, internationalization is a main feature of the next development cycle.

Getting back to Japan …

One of the services we do at Blast is training, and I was hired to hold an OpenNMS training course for a customer in Tokyo. We don’t charge extra for work outside the country, but since we bill travel expenses back to the client we don’t get too many such requests.

While I was there, I hoped to meet up with the Tokyo OpenNMS Users group. I dropped a note to the list, and Hiro Sugisaka did all of the work to get us a nice place to meet and eat.

So we had the first TOUG meeting. 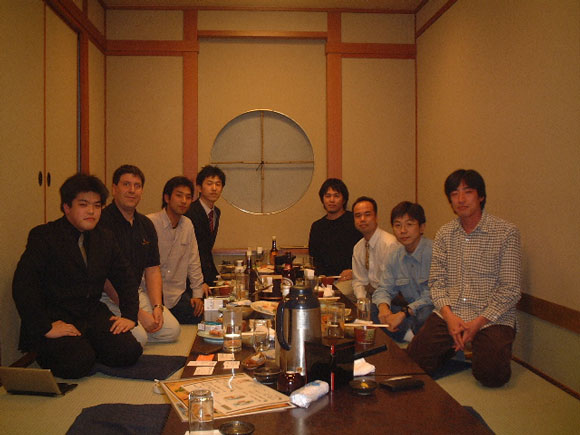 It was a lot of fun. While many of the guests seemed to worry about their English skills, everyone one spoke better English than I spoke Japanese. It was a special treat to meet Katsuhiro Kondou, not only a TOUG founder but also the main force behind OpenNMS on Solaris (back in the day).

Yachi-san had also started converting the OpenNMS webapp to Japanese: 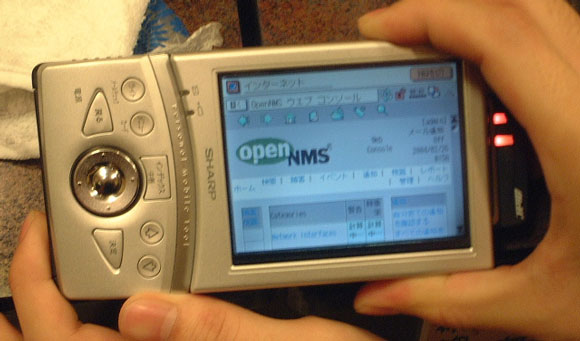 I hope in a couple of months there will be an easy way to do this.

Sugisaka-san deserves many thanks for making this happen.

I really enjoyed Japan. The people are friendly, the country is very clean and the consumer electronics are a couple of years ahead of what we get in the states. I really, really wanted a new Sharp Zaurus, and I even found a deal on one in Akihabara, but unfortunately there was no way to set it up in English.

Due to my travel arrangements I stayed the weekend (the Saturday night stay resulting in cheaper airfare rule applies), so I got to spend some extra time in Tokyo. I thought about taking the bullet train (shinkasin) to Kyoto or Nikko, but then decided that there was too much to see in Tokyo proper. I visited Ginza, Asakusa, the Imperial Palace gardens and Shinjuku (where I was staying).

My last night in Japan found me pretty tired and ready for bed, but the phone rang and it turned out to be Jamie Roughan, the other founder of TOUG. He invited me out to Shibuya (just south of Shinjuku) for dinner. It sounded like fun, so I went, and I was glad I did. Shibuya is where a number of scenes in the movie “Lost in Translation” were filmed.

Here he is goofing off with his girlfriend Yuki: 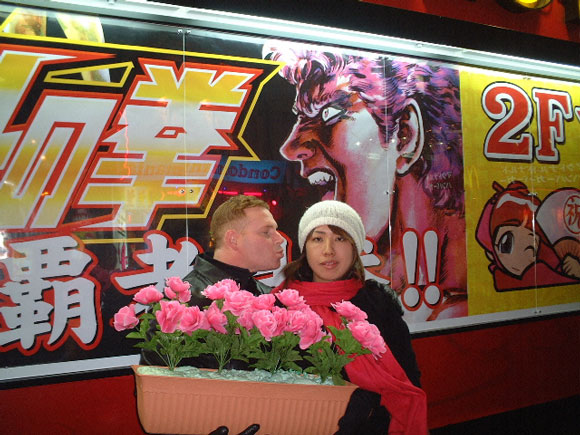 The restaurant where we dined was on the 14th floor of a building, with a great view of the city. Good food and good company, like the rest of my trip.

The trip home was uneventful, although I had to go through Kennedy airport in New York. Many of the people there were rude, the airport is dirty, and the public restroom I used was downright filthy. Even though I had spent 12 hours on a plane, I was ready to turn around and head back (grin).

I recommend a trip to Japan to everyone, and hope I can return there in the future.

But it is nice to be home. As I write this I am on the front porch of the Blast offices, listening to the frogs.

2 thoughts on “Let's get this enkai started …”