I went to the post office today and happened to see this on the bulletin board: 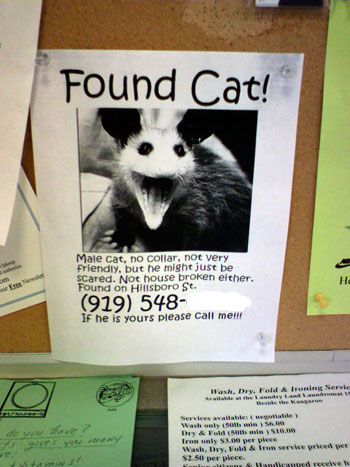 It’s probably an old joke, but it made me chuckle. I wonder what the angle is for the person who posted it? Still can’t bring myself to call the number.

I’m a big fan of Google (who isn’t) but I’m often curious as to how page rank, etc., actually works. OpenNMS has been the first hit for “open source network management” for years, and I’m not sure why that is. We obviously don’t get much press or spend a lot of money on marketing, but we’re even ahead of the Wikipedia article in rankings.

In researching this post, I also couldn’t help but notice the number of other tools that have adopted the term “enterprise-grade”. We were the first to use that term (after we successfully deployed at a client site with well over 50,000 devices using a single instance of OpenNMS) and we still have most of the top ten hits under “enterprise-grade network management”. I assume they use the term because it sounds good, as I have yet to see anyone come close to OpenNMS in scale, especially when you divide by the number of servers needed. I can’t think you can call yourself enterprise-grade if it takes 100 servers just to manage the network.

Anyway, that really wasn’t the reason for this weekend post. As I assume everyone has noticed, awhile back Google added some nice AJAX-y completion features. Type in “open” and it suggests “open office”. I decided to see who owned each letter of the alphabet. Here is the list:

Interesting, huh? Only two of the letters, D for Dictionary and Q for Quotes, are generic words. The government is represented with I for IRS and U for USPS. Online resources are prominently represented: Craigslist, Ebay, Facebook, Gmail, Hotmail, MySpace, Photobucket and Youtube. There is also one “.com” site with Realtor.com. The rest are all companies.

I had to look up Photobucket and Zillow, as I had never heard of those before (one is a Flickr-type site and the other is real estate focused). Three of them: Best Buy, Southwest Airlines and Verizon Wireless actually return two words even though only one letter was typed in the search box.

I’m not sure what it means to “own” a letter of the alphabet on Google, but it can’t suck.