Not to start this post off on a down note, but wandering around OpenSource World I couldn’t help but think I was attending the last LinuxWorld Expo.

I’m not sure where the show lost its way, but the once huge conference was just a shadow of its former self. OSCON has become the main show for open source, and with Linuxcon coming up in a few weeks I can guess why the hardcore Linux crowd stayed away.

For example, the Linuxcon keynotes will include Linus Torvalds and Mark Shuttleworth. The first keynote at OpenSource World was a replacement speaker from Dell who simply went through their standard cloud computing slide deck. The hall was so empty they removed about 200-300 chairs from the back before the next speaker to keep it from looking so sparse.

I did actually have some fun at the two sessions I attended. The first was Brian Aker’s Drizzle talk. 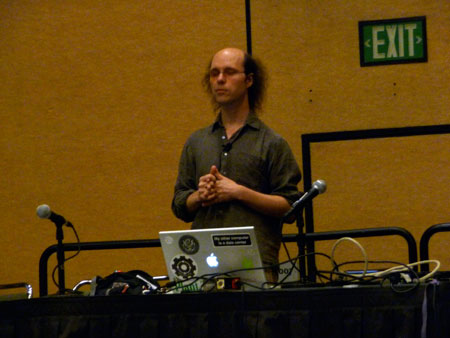 As most of you know, Drizzle is sort of a return to the MySQL roots. It is designed to be a small and extremely fast database for use on web sites (yes, I’m oversimplifying so check it out if you need more). Being sort of a ground-up re-imagining of MySQL it tries to take the best of the older platform with an eye on the future. For example, Drizzle is being designed solely for 64-bit architectures on machines with lots and lots of RAM, the assumption being that once the project is ready for production that will be the default system anyone would want to use for it.

What I really enjoyed was his strategies for getting the community more involved in the project. He related a story of when MySQL started growing and they realized that everyone in the community who was a serious contributor had been hired by the company. I hope to adopt some of his ideas for community involvement in Drizzle for use with OpenNMS.

The second session was a panel hosted by Larry “Dark Lord of Open Source” Augustin on open source compliance. As Chris Dibona says “All Panel Discussions Suck” and this one was no exception.

The thing I hate about panel discussions is that there is little give and take between the audience and the panel members. For example, there was a lot of talk on concerns of using open source inside an organization with license compliance, compatibility and things like that, when the truth of the matter is that as long as code doesn’t leave an organization, open source software is pretty close to public domain. The rules don’t usually kick in until it is distributed (as the license is normally enforced under copyright law) and so many organizations can see huge benefits from taking and using open source software internally.

But I wasn’t able to ask about that.

Two of the panelists seemed to have a real solid understanding of open source software. Tim Golden, of Bank of America, brought up something near and dear to me: work for hire.

At OpenNMS we make a large portion of our revenue from custom development. All the work we do gets put back into the product, so the client gets exactly what they want out of OpenNMS and we get to make OpenNMS more powerful.

However, most standard contracts have a “Work For Hire” clause that states the client owns all the code, so we have to either remove it entirely or rewrite it extensively to make it more in line with the ideals of open source software.

He also brought up this scary concept of “residual knowledge”. It would seem logical that if I am doing work for a client and I come up with an idea during that time that I should own the idea. But what if that idea was triggered by some confidential knowledge I obtained from the client? Do they have any claim to future work based on it? Apparently this is a hot topic within cloud computing since previously confidential business practices get more exposure. It was a term I had not heard of before and one that I plan to keep an eye one (plus adding a new “residual knowledge clause” to our contracts).

I also was impressed with last minute panel replacement Steve Wretling, from Kaiser Permanente. Kaiser seems to have a real grasp of how to deploy open source within their environment and they have put in place processes to take advantage of it.

So, overall, while I hated the format I enjoyed the session.

The next keynote was by Debra Bowen, the California Secretary of State. She is a good speaker and very tech-saavy, but she has also been branded a Luddite due to being outspoken in her criticism of electronic voting machines. The stories she told were scary, and it made me value the optically scanned paper ballots still used in parts of North Carolina.

Then the fun began. I met up with John Mark Walker, Michael Coté and Luke Kanies for lunch. John Mark is starting a new venture promoting open source on Windows, Coté was unusually quiet, and this was the first time I’d met Luke.

I think I know why Coté was quiet.

Let’s just say if you ever need to kill a couple of hours, put me and Luke in a room and press “Go”.

I found Luke to be quite charming, and we found a lot of things in common between his team’s creation of Puppet and our team’s work on OpenNMS. We both can talk at length about a variety of subjects. But we are also very different: he’s skinny, I’m fat; I eat animals, he does not, etc.

Based on my experience with the morning panel discussion, we thought that ours should have more audience interaction and I think it went okay. We had a few people walk out and Luke says he saw one person sleeping but for the small crowd that stayed (and stayed awake) I hope they got a little something out of it. I had fun. 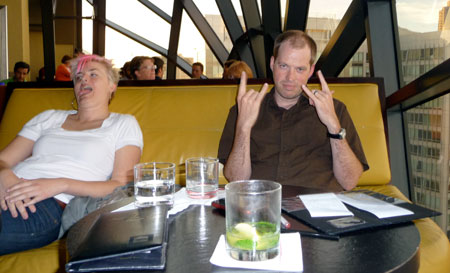 That evening Luke and I met up at the View Lounge at the top of the Marriott and continued our discussions on everything from open source, running a business, popular culture and shoes. We were joined by filesystem hacker extraordinaire Valerie Aurora and later by Michael Coté. 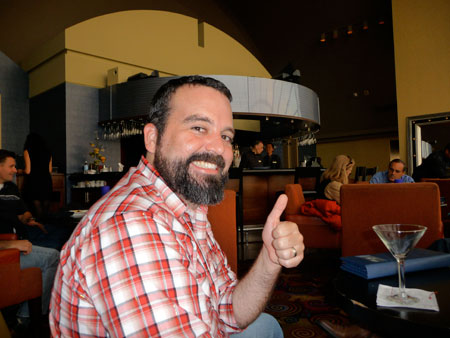 Val came up with a game to name three topics of conversation that should be banned when geeks meet socially. Last year her three were computers, the election and the financial crises. The new three became computers, health care, and social networks.

Hence the discussion about shoes.

After awhile we split up and Coté and I continued over sushi and sake. I always enjoy talking with him because he is an analyst who used to be a programmer. I think he gets where I’m coming from. The best technology salesperson I know is a guy named Doug Gilkey who has an advanced degree in aerospace engineering, and in much the same way Coté is one of the best analysts in the management space since he’s been there.

All in all I’m glad I came, but I don’t think I’ll be back. I can’t make Linuxcon this year, but perhaps next, and OSCON is apparently returning to Portland so I might have to combine a trip to that show with visiting clients in the area.

But I gotta buy some new shoes.